By Ledio Karaj, a researcher in history and medieval art from Albania.

In the endless range of European and world heritage, there are many cities that hold remarkable treasures of culture, history, art, and architecture. But among them, Istanbul has a special place.
A city that Italian Author Edmondo De Amicis describes as:

“a universal beauty where poet and archaeologist, diplomat and merchant, princess and sailor, northerner and westerner screams with same admiration.”

Its diverse history makes it to be considered one of the most unique cities in the world. But beyond his rich history, how protected is the city’s cultural heritage and what does it offer for the future?

The great city with a great history

We must keep in mind the fact that the historical timeline of the city is very complex and often is associated with three main periods (antiquity, medieval/Byzantine, and Ottoman), and by its three names, Byzantium, Constantinople, and Istanbul.
In today’s city streets, you’ll still get the sensation of walking in antiquity, the Middle Ages, and modernity at the same time. To see the mesmerizing view of the Bosphorus, massive imperial walls, the palaces of the emperors, but also the magnificent architecture of Hagia Sophia or Blue Mosque, and the colorful Ottoman houses, make every visitor an admirer of the city. All this history of centuries is summarized in one place.
But on the other side, the future of this great heritage is in peril.

Last year, I had the opportunity to be present in the city on the day when one of the most iconic monuments in the world, Hagia Sophia changed its status as a museum and re-transformed as a religious place. This great monument dates from the 6th century, it was built as the largest cathedral in the world at that time by emperor Justinian and has remained so for about 1000 years. Until 1453, when the city was conquered by Ottomans and Hagia Sophia was turned into a mosque. In 1934, following a decision taken by Mustafa Kemal Atatürk, the monument turned into a museum. Having the status of a museum, Hagia Sophia preserved and shared the values of its multi-layered history, serving the whole world and not only to one community. But today, we can’t say the same thing, because the change of its status as a museum also changes the purpose of the building.

Another cultural landscape of the city are the Land Walls, they constitute a remarkable area in the historical peninsula of Istanbul. Today they are actively under threat by the demolition of Yedikule Historic Vegetable Gardens, but also by the ongoing renewal projects, restoration, and reconstruction works.
Not very far from the great Land Walls of Istanbul stands another cultural monument, the Chora Museum, a former monastery that had the status of a museum till the end of 2020 when the building was turned into a mosque.
Hagia Sophia, together with other monuments and sites mentioned above are part of the “Historic Areas of Istanbul”, on the UNESCO World Heritage List, sharing universal values, and serving as symbols of world cultural heritage.
All of these factors make the beauty of Istanbul to be faded. The best way to keep these historical monuments and landscapes alive is to protect heritage. Trying to change heritage inevitably changes the historical identity as well.

Today, Istanbul blends tradition and modernity, it is an ancient city with an unparalleled cultural heritage.
That’s why Umberto Eco describes his experience with these words:

“I could no longer tell if I was in Byzantium, Konstantinopolis, or Istanbul. I realized that I made a trip where I traversed three civilizations and three periods at the same time. But this city with three names and three histories was in fact still the same.”

I would describe Istanbul as the city of great heritage and centuries-old history, but also as the city of lost heritage. The capital where the imperial walls of Theodosius and Constantine are gradually turning into ruins and where the monuments and museums that represent the universal values of heritage change their purpose. This can also can put into question the great reputation of Istanbul’s historical diversity of cultures and people. As it has always been considered the connecting point between Europe and Asia, east and west, Christianity and Islam.

Through the eyes of a visitor but also through discovering its cultural heritage, Istanbul appears as a huge mosaic of history and architecture but at the same time, many parts of this great heritage are in danger. At this point, we can say for sure that the preservation and shared values of cultural heritage serve not only to one city but to the entire world. 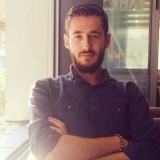 Was born and raised in Albania. He is a researcher in history, medieval period & byzantine art. Photography and museology are his other fields of interest. Ledio have a bachelor degree in History and a Master in Cultural Heritage management from University of Tirana, Albania. He has participated in architecture conservation projects in old city of Gjirokastra, Albania (UNESCO World Heritage Site), also in different other projects related with heritage and museology, in Balkans region and Europe. He believes that working in Cultural Heritage field is the best way to understand and discover the history of humankind.
In July, 2019 he participated in European Heritage Volunteers programme at Tyniec, Krakow, Poland. Part of the European Heritage Times since November, 2019.